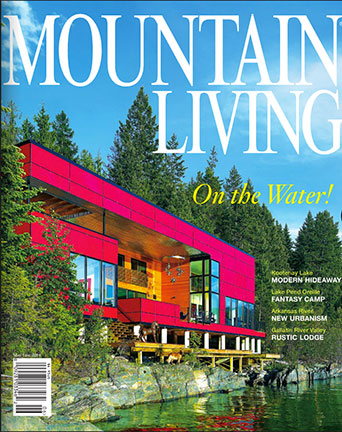 “The home’s cozy spaces are perhaps even more charming given the site’s expansive beauty, which the design team enhanced with several water features. The back of the home looks out onto a large pond, which is fed by a stream that origi-nates in a smaller pond uphill. “It looks like a spring,” Miller observes. “It has a natural sense about it.” Along the lower level of the home, near several bedrooms, landscape designer Beth MacFawn created a retaining wall of stone—dubbed “the weeping wall”—down which water trickles with soothing gurgles before collecting in a small pool and then recirculating. Steps along this wall of water lead up to the home’s front door, creating a dramatic entry. “